The working group divided into three groups, and each group presented about the following after in-depth investigation and analysis:

3.1.1 Implementable features of internet voting, by Mitsuru Ichinosawa, VOTE FOR

Among these, the security of free will is a particularly tricky task in internet voting because the vote is cast in private. In addition to the above, it is also possible to analyze vital information, for instance, to make sure that you are not voting in an abnormal mental state. But, at the same time, it is necessary to think about various aspects of practicality.

Once internet voting is realized, existing polling stations would need to be scaled back, and their specifications changed. Nevertheless, polling stations would need to be continuously set up for people who have difficulty securing an internet voting environment or have trouble using electronic devices. Also, for the consistency of the voting system as a whole, it would be more suitable to vote via the internet than using paper even at the polling stations. Based on these assumptions, the following problems can be assumed:

Discussion Ichinosawa: In the event of a system error, the voter may think that they have completed the vote, but in fact, it remains unfinished. During the demonstration experiment in Tsukuba city, the management had obtained email addresses, and the vote completion was conveyed to voters through email. Asai: I think such a method is suitable for internet voting. However, there may be challenges such as how to inform through email those people who vote at polling stations but through internet voting. There might also be cases where, for instance, people with disabilities cannot process/receive emails. Inamura: I think it is necessary to have a system that can separate data for each status such as "verified," "voted," "poll result sent," and "poll result was aggregated" if it is easily classified. Ishii: While aiming for the ideal type of internet voting, I think that it is better in terms of risk reduction to also have a backup plan such as paper-based voting.

3.2 Discussion about the authentication technology

We would like to proceed with our investigation in the following way in the future:

To perform authentication/authorization/identity verification "correctly,” we investigated the following technologies that can be utilized:

Diagram of the basic system 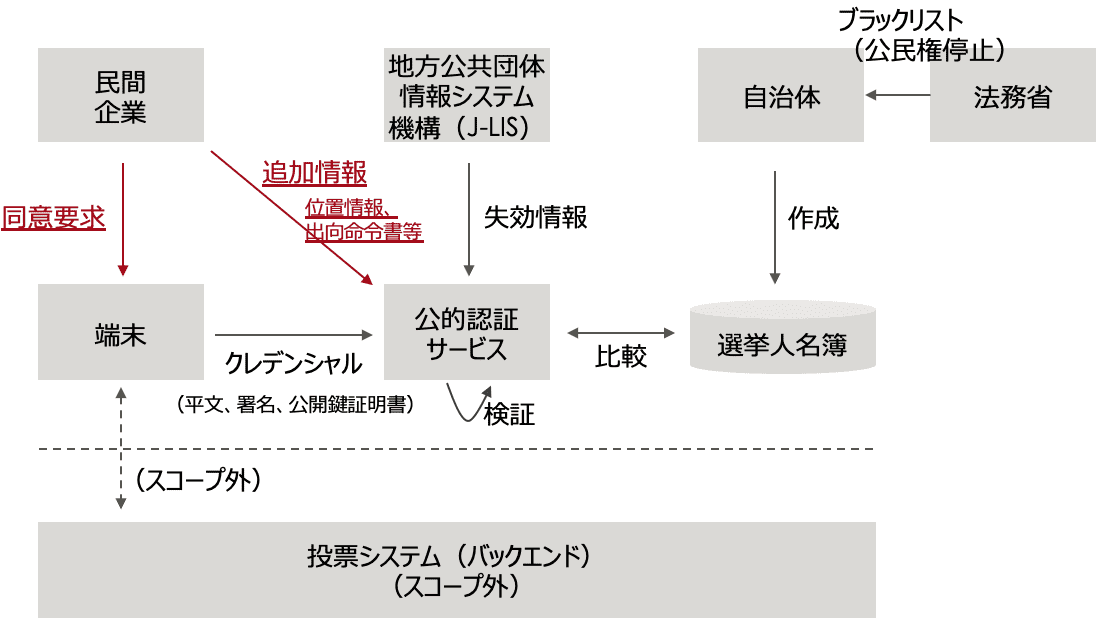 Using additional information to increase the strength of personal identification

Voatz: An app for US troops deployed abroad to vote through their smartphones.

=>Therefore, the device used for authentication and apps that work on them should be made more secure.

Certain technologies for creating a secure environment on the device may include:

Ichinosawa: There is a movement focused on connecting the My Number Card to one personal device (most likely a smartphone). If it is implemented, it is possible to use a personal device as additional information. But how about the level of security required for the device? In that respect, I think that our discussion here can be utilized.

As discussed in the previous article, electronic voting techniques may contain one of the following techniques:

Given that elections consist of centrally controlled operations, it seems that the blind signature technique may be a good match.

Image of voting by blind signature

What we want to achieve with CREAM:

CREAM is an application of the method of zero-knowledge proof of cryptography used in "Zcash," etc. that is run on a public blockchain while keeping information such as the sender’s and receiver’s address and the sent amount secret.

※ Supplement Regarding accuracy, verifiability, and transparency, it is possible to check double voting and verify whether my hash has been reliably used but not verifying whether my vote has been correctly counted and given the sign △. 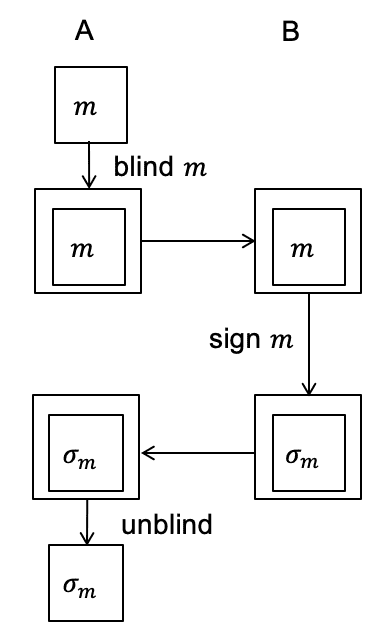 Architecture proposal for realization of concealment

Each group clarified the issues assigned. Likewise, we will continue to investigate and discuss the proposal and proceed with the proposal’s materialization.